Adenomyosis: Back to the future?

Adenomyosis is a benign invasion of endometrium into the myometrium. It produces a diffusely enlarged uterus and predominantly affects women in the late reproductive age. It has recently been associated with a negative impact on female fertility. Diagnosis is challenging because nonspecific symptoms can be present. However, it is asymptomatic in the majority of women. Medical treatment with GnRH agonist seems to be promising, particularly in subfertile women.

A retrospective study was performed (182 patients) by examination of histopathological results with “adenomyosis” between January/2013 and September/2016. The patients ranged in age from 34 to 78 years and the majority (94.5%) were over 40 years old. Most (90.6%) were multiparous. All women underwent a sonographic evaluation. More than a half had a heterogeneous myometrium (75.7%) and concomitant presence of myoma (65.4%). The majority of women were asymptomatic, nevertheless, when symptoms were present, menorrhagia and metrorrhagia were the most important complaints. About one third of women had had prior uterine surgery, 67.6% had had previous caesarean section(s). Medical treatment with progestatives was used by 61.3% of women and 23% tried more than one type of hormone therapy. Endometrial cancer was present in 5.5% of cases, all of which were lowgrade endometrioid adenocarcinoma.

Adenomyosis is an important challenge in gynaecology and often remains a post-operative diagnosis after hysterectomy. Clinicians should be on the watch for ultrasound features suggesting its presence to allow an early diagnosis. Future investments in the creation of diagnostic algorithms and alternative treatments are warranted. 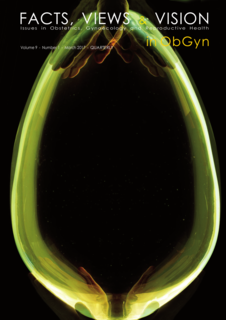