Introduction: Today, perinatal audit focuses basically on cases of perinatal mortality. In most centres in Western Europe, perinatal mortality is low. Identification of metabolic acidosis at birth may increase index cases eligible for evaluation of perinatal care, and this might improve quality of perinatal audit. The aim of this study is to assess the incidence of metabolic acidosis at birth in order to estimate its impact on perinatal audit.
Patients and Methods: Cord blood was analysed for every neonate born between January 1, 2010 and December 31, 2012 in Ziekenhuis Oost-Limburg, Genk. Acidosis was defined as an umbilical arterial pH ≤ 7.05 with or without a venous pH ≤ 7.17. Respiratory acidosis (RA) was defined as acidosis with normal base excess, and metabolic acidosis (MA) was defined as acidosis with an arterial or venous base excess ≤ -10 mmol/L. In case of failed cord blood sampling, 5 minute Apgar score ≤ 6 was considered as the clinical equivalent of MA. Retrospective chart review of obstetric and paediatric files was performed for all cases of MA, together with review of paediatric follow-up charts from at least 6 months after birth. Perinatal asphyxia was defined as biochemical evidence for MA at birth, associated with early onset neonatal encephalopathy and long-term symptoms of cerebral palsy.
Results: In a total of 6614 babies, perinatal death up to 7 days of life occurred in 40 babies (6.0‰). Acidosis was present in 183 neonates (2.8%), of which 130 (2.0%) had RA and 53 (0.8%) had MA. Of the 173 neonates with unknown pH values, 6 had Apgar scores ≤ 6. Of 59 babies born with MA or its clinical equivalent, 52 (88.1%) showed no neurologic symptoms at birth. Two (3.4%) died in the early neonatal period, one after abruptio placentae and one due to chorioamnionitis and severe prematurity. Five (8.5%) MA babies had symptoms of early onset neonatal encephalopathy, which recovered in three (5.1%), and persisted long-term in two others (3.4%). The two babies with cerebral palsy (prevalence 1/3300) were both born after instrumental vaginal delivery for foetal distress.
Conclusion: In our study cohort, the incidence of perinatal mortality is 6‰. The incidence of metabolic acidosis is 9‰. Addition of cases of metabolic acidosis to those of mortality doubles index cases eligible for perinatal audit. The incidence of babies surviving with cerebral palsy after metabolic acidosis at birth is very low (0.3‰). Our results suggest that instrumental delivery for foetal distress might be a risk factor for metabolic acidosis with persisting neurologic dysfunction. Our study illustrates that identification of peripartum near-miss is useful for perinatal audit. 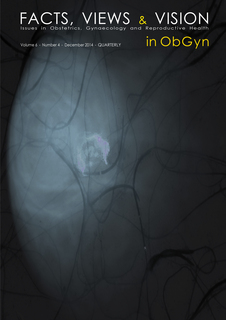 An International Terminology for Endometriosis, 2021