Autoamputation of the ovary is a rare occurrence of uncertain aetiology with only a few cases reported in literature. It usually develops following ovarian torsion or torsion of a dermoid cyst with subsequent necrosis of the pedicle and autoamputation. We present the case of a 42 year-old woman was admitted for a laparoscopic removal of a right ovarian cyst. The ultrasound showed a right ovarian cystic mass suggestive of a cystadenoma, and another heterogeneous small echogenic cyst of the left ovary. During laparoscopy, excessive bleeding from the ovarian cortex complicated the cyst stripping and, considering the age of the patient and the emerging technical difficulty of the procedure, a total adnexectomy for the right ovary was performed. While exploring the small cyst on the left ovary, a dermoid cyst was found in the Douglas pouch. This finding could be interpreted as an autoamputation of the adnexa due to an asymptomatic torsion of a previous ovarian cyst arising from the left ovary. Medical errors could occur due to lack of knowledge, expertise, as well as lack of training and surgical skills, but also due to an unfortunate association of very rare confounding factors. Even in the hands of experts, following the basic rules of surgery remains a milestone in teaching and preventing surgical complications. 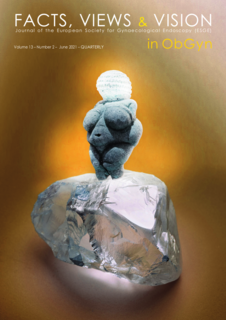