Background: The best surgical technique for managing ovarian endometriomas is still widely debated, though the current standard is stripping cystectomy. The use of plasma energy as a treatment option is a relatively new concept and little data is currently available on this method. The aim of this study was to determine the feasibility of the use of plasma energy in our daily clinical practice by looking at various postoperative outcomes.

Results: This study demonstrates a significant decrease in the proportion of patients reporting pain postoperatively when comparing the number of patients with dysmenorrhoea, dyspareunia, and chronic pelvic pain pre- and postoperatively. In addition, the median number of days until women returned to work postoperatively was 9 days (interquartile range (IQR) 8-11 days). The postoperative pregnancy rate was 46.2% (6 of 13 women wishing to conceive) and the recurrence rate was 9.5%.

Conclusions: In conclusion, plasma energy is a promising alternative to stripping cystectomy, as comparable results for postoperative pregnancy and recurrence rates can be observed. However, further research is necessary to draw firm conclusions when comparing these two techniques. 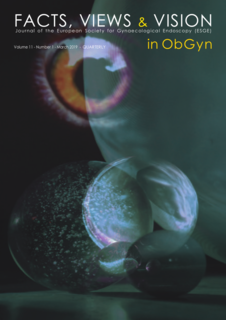