Koen Vanmechelen acts as artistic reviewer for Facts, Views and Vision in Obstetrics and Gynaecology 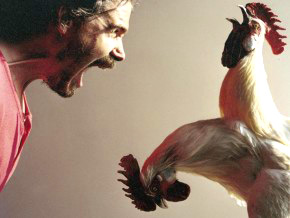 Koen Vanmechelen is one of today’s artists that no longer chooses for just one medium to work in, but instead has developed a unique mix of different media. His works range from highly expressive paintings and drawings, to photography, video, installations, works in glass and a recurring wooden sculpture. What connects all these different ways of expressing himself is the chicken and the egg. Over the years they have become an important symbol that has enabled the artist to make a connection to scientific, political, philosophical and ethical issues. The intricate system that he thus developed is the subject of the debates, conversations and lectures the artist organizes or takes part in to shape his philosophical universe.

Before he started his all-embracing project, he made wooden constructions, assemblages, and cages for poultry, staying close to the tradition of the Belgian assemblage artists.

Nowadays his work can be divided in three main categories:

“Cross-breeding is the one thing” says Koen Vanmechelen: “We need to cross breed across the boundaries if we want the world not to perish. We need to think cosmopolitical. Nothing is as beautiful as joining with other cultures and take energy from this”.

For his first cross-breeding Koen Vanmechelen chose the ' Mechelse Koekoek', the pride of Flemish chicken breeding and a relative in name to the artist. It was cross-bred in 1998 with the ' poulet de Bresse', a first-rate French chicken. Their cross-breeding, the ' Mechelse Bresse', was later cross-bred with the English ' Redcap'. This ' Mechelse Redcap’, uniting Belgian, French and English nationalities was crossbred with the American ' Jersey Giant' which is not surprisingly the biggest chicken on earth. More cross breedings were made with the ' Dresdner Huhn', the Dutch ' Uilebaard’, a Brasilean chicken, and chickens from Mexico, Thailand, Turkey, Cuba, Italy and Russia.

For more information about the work of Koen Vanmechelen: www.koenvanmechelen.com